Verity Pugh examines William Morris's lifelong fascination with flowers: his inspirations, his garden, his designs and the hidden meanings behind the petals.

It’s safe to say that William Morris (1834-1896) had a soft spot for flowers - his wallpapers, tapestries and textiles show his complete fascination with them. Did you know that in his lifetime Morris designed over 50 wallpapers, with even more being produced by his fellow designers at Morris & Co.?

Each pattern is created with flowers or foliage as the central structure - nature seemed to provide Morris with the perfect sweeping shapes and soothing repetitions from which to draw his inspiration. He created his distinctive style by combining observational drawings of plants and flowers with his flair for stylised pattern-making. This flattening of natural forms and focus on pattern and shapes to give a pleasing overall design came from Morris’ interest in medieval tapestries and illuminated manuscripts, as well as illustrated books called herbals - 16th and 17th century culinary and medicinal guides to plants - which categorised flowers in recognisable but simplified detail. Morris was also influenced by pattern and dye techniques from international sources including India, Japan and the Middle East.

The many gardens and rural environments which Morris knew well were a key source of inspiration for his floral wallpaper designs. This began as a child, living in Walthamstow, north London, where Morris could spend time in the surrounding woodlands of Epping Forest. His design Acorn (1879) was a nostalgic nod to these early memories. The first wallpaper Morris created, in 1862, was Trellis (produced in 1864), which Morris drew from observation in the garden of his first marital home, Red House in Bexleyheath. The wallpaper shows a trellis with roses twisting through the grid-like structure - as well as birds and insects which add to the richness of life in the design. Red House was a labour of love, a home commissioned by William and Jane Morris and designed in 1859 by their architect friend Philip Webb, who also drew the birds in Trellis. After the family moved to London, the purchase of their country home Kelmscott Manor provided Morris with another beautiful garden and countryside beyond for constant inspiration. 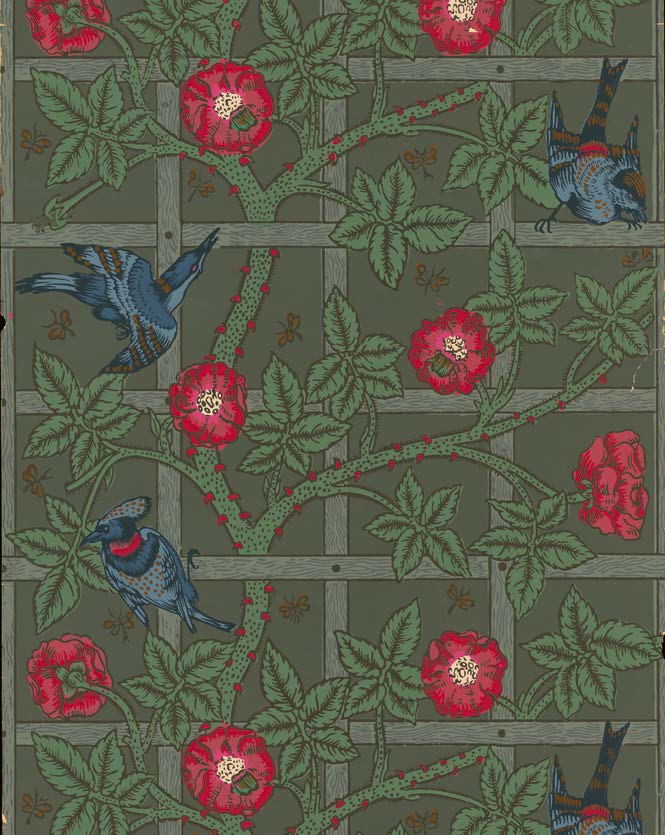 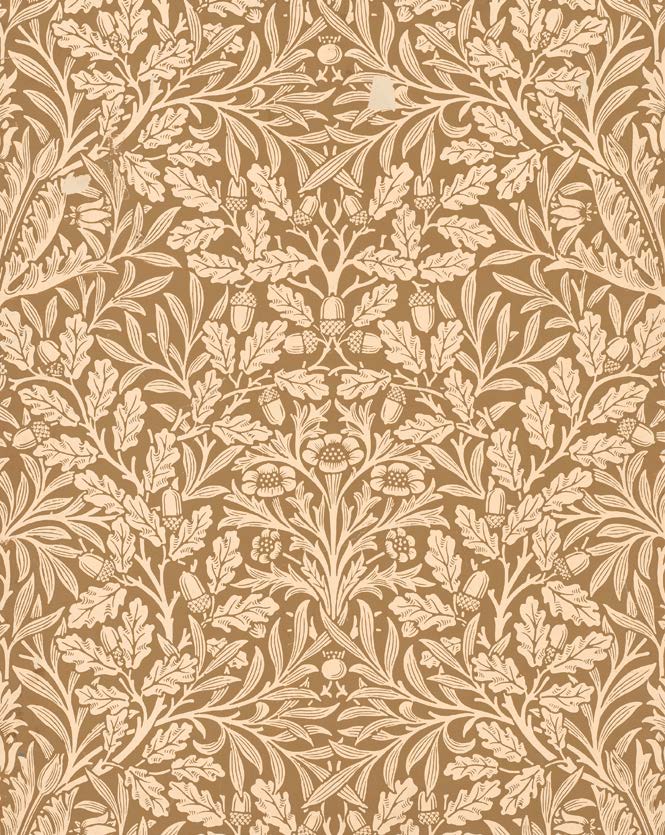 His daughter, May Morris, said that Wild Tulip (1884) ‘is all “Kelmscott” to me: the peony and wild tulip are two of the richest blossoming of the spring garden at the Manor’. Similarly, the scented jasmine flowers which grew on the walls of the house led to his Jasmine wallpaper (1872). The surrounding woodland, meadows and hedgerows meant the area was bursting with wildflowers - as captured in Blackthorn from 1892, co-created by his design partner John Henry Dearle (1859-1932). 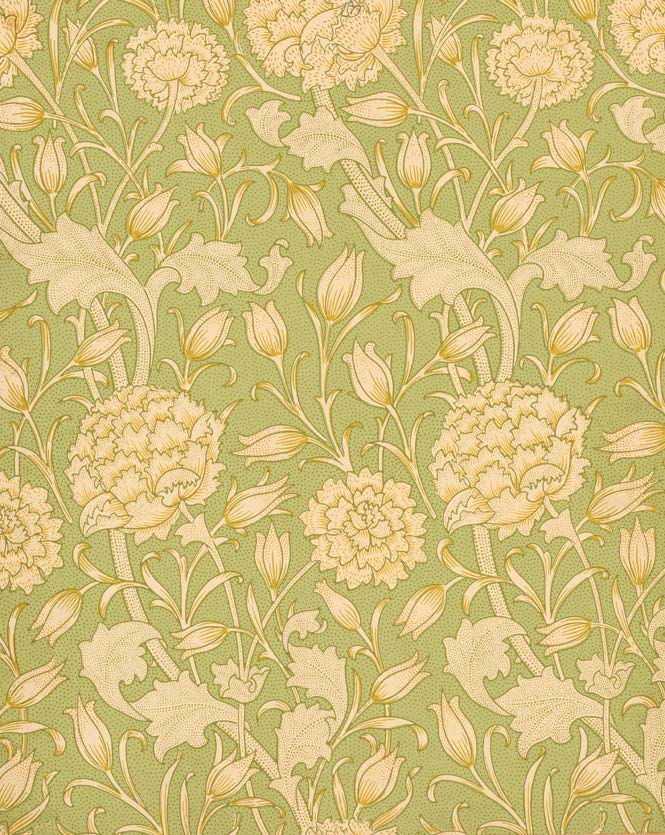 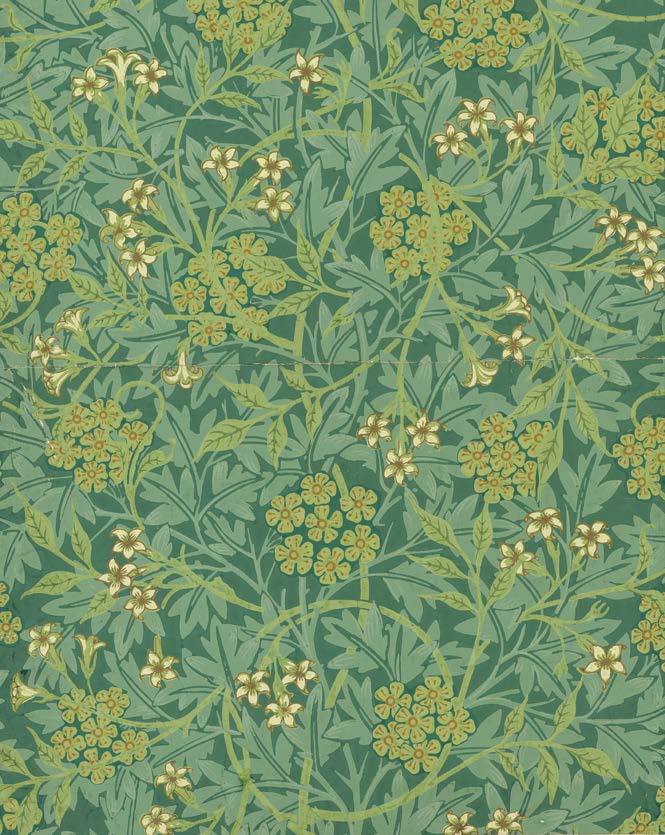 William Morris was unusual in his choice of flowers. In the Victorian era, the fashion was for ornate wallpapers which included exotic flowers, but Morris chose to champion varieties of wildflowers

and other common trees and plants recognisable to all. This was perhaps linked to his Socialist ideals of art being fundamental and not for the privileged few. For example, his first wallpaper that went to production was Daisy (1864). He would also typically name the wallpapers after the secondary or lesser-known flower in the design. Pimpernel (1876) is an example of this - the star of the show in this design is the bold tulips with their fan-like petals - but Morris draws our attention to the delightful yellow pimpernels that make up the background. 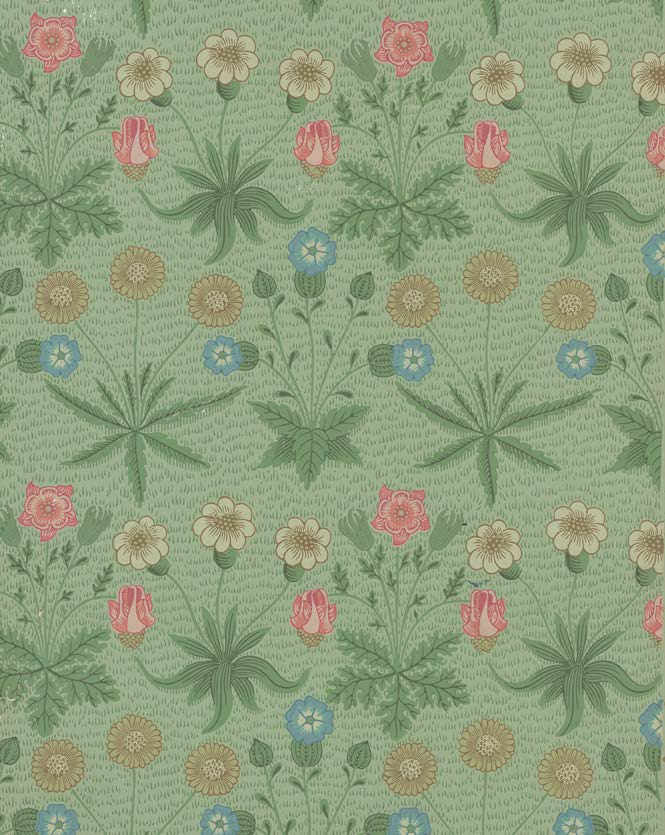 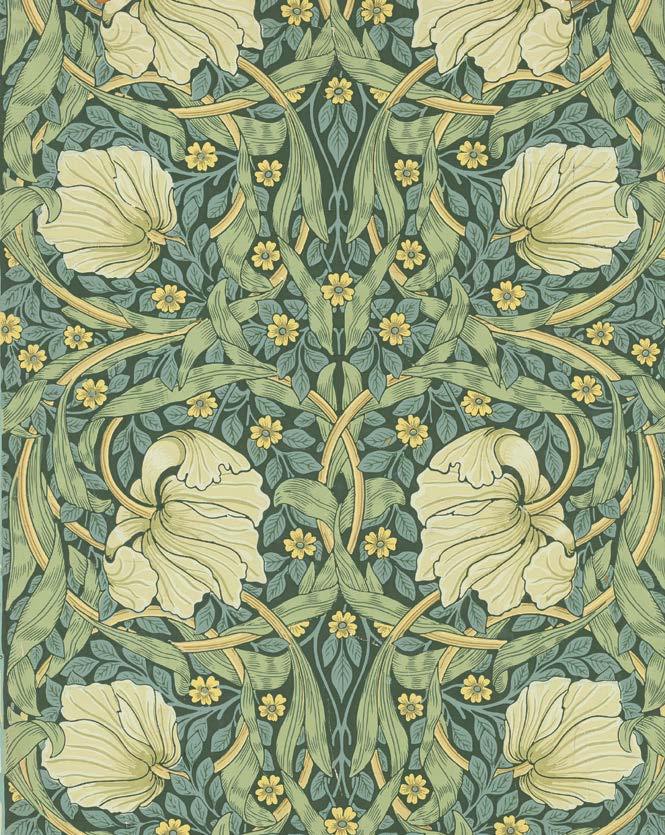 A Very Victorian Suspicion: the symbolism of flowers

In an era obsessed with decorum and propriety, it is perhaps not surprising that the Victorians liked the idea of subtle messages that could be given through flowers. Some of these associations - such as red roses with love or lilies with purity - are still familiar to us today. Even though Morris himself didn’t necessarily sign up to this way of thinking, many of his Victorian clients would have been well-versed in the supposed hidden meanings of flowers. This could have meant a very diﬀerent take on some of his designs for some at the time.

For example, Fruit (1866) features pomegranates, which could symbolise foolishness - an association that came from the Greek myth of Persephone being tricked by Hades to eat pomegranate seeds and force her to spend half the year in the underworld. The use of poppies in Pink and Poppy (1881) would for some have symbolised sleep - which had aﬃnity with the sick who need rest, death in eternal sleep, or pleasure and dreams. Some flowers Morris used would have had more universally positive associations, such as daisies in Daisy, signifying innocence, the larkspur flowers in Light Larkspur (1875), symbolising levity and lightness or Jasmine, whose flowers indicated amiableness. Interestingly the chrysanthemum flower, seen in Morris’ Chrysanthemum (1877), has been a significant one in both Eastern and Western cultures. Depending on sources, it had many potential meanings to the British Victorian public - including cheerfulness during times of adversity, truth and honesty (white chrysanthemums), declaration of love (red) or slighted love (yellow). In Japan today, the pink kiku (chrysanthemum) is the symbol of the Japanese emperor and has long associations with nobility and longevity. 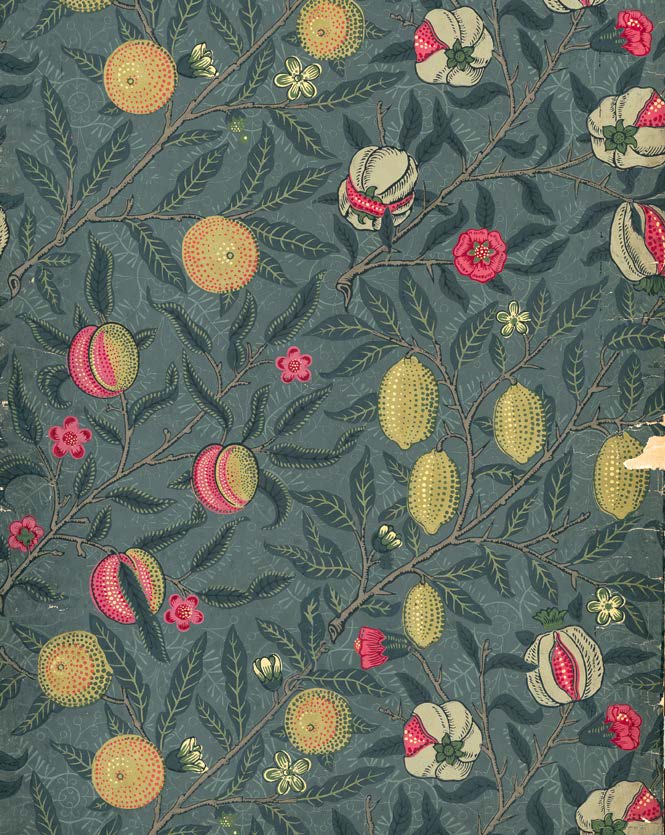 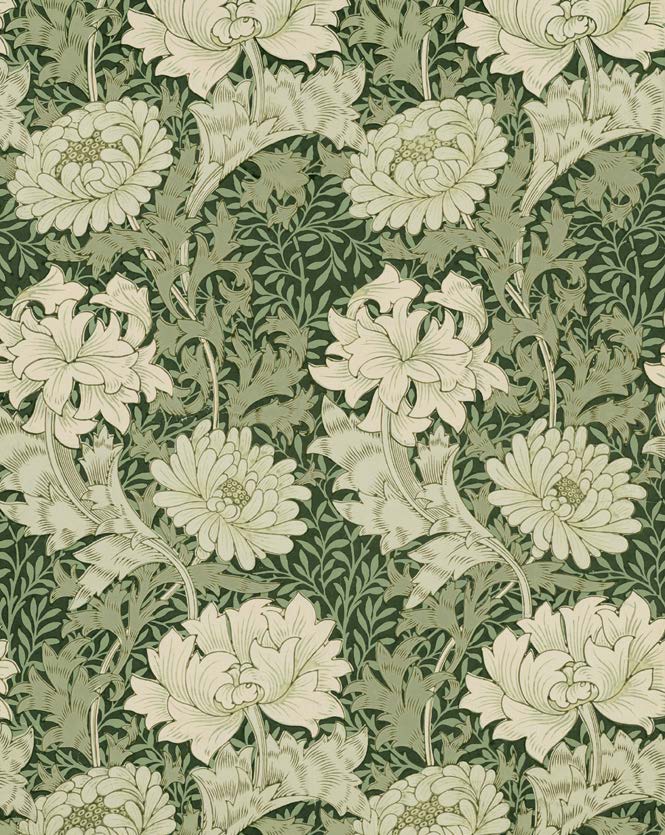 Whether we consider his floral fascination to be aesthetic, personal, political or symbolic, Morris’ designs have inspired us for generations. He has come to represent British design and to be a hero for the humble, everyday flowers that surround us.

To enjoy many of William Morris’ beautiful floral wallpaper designs for yourself, our exhibition The Art of Wallpaper: Morris & Co. is on until 11 June.

Pinks at Dovecot
Christmas Hours: Pinks will be closed from 24 Dec to 4 Jan