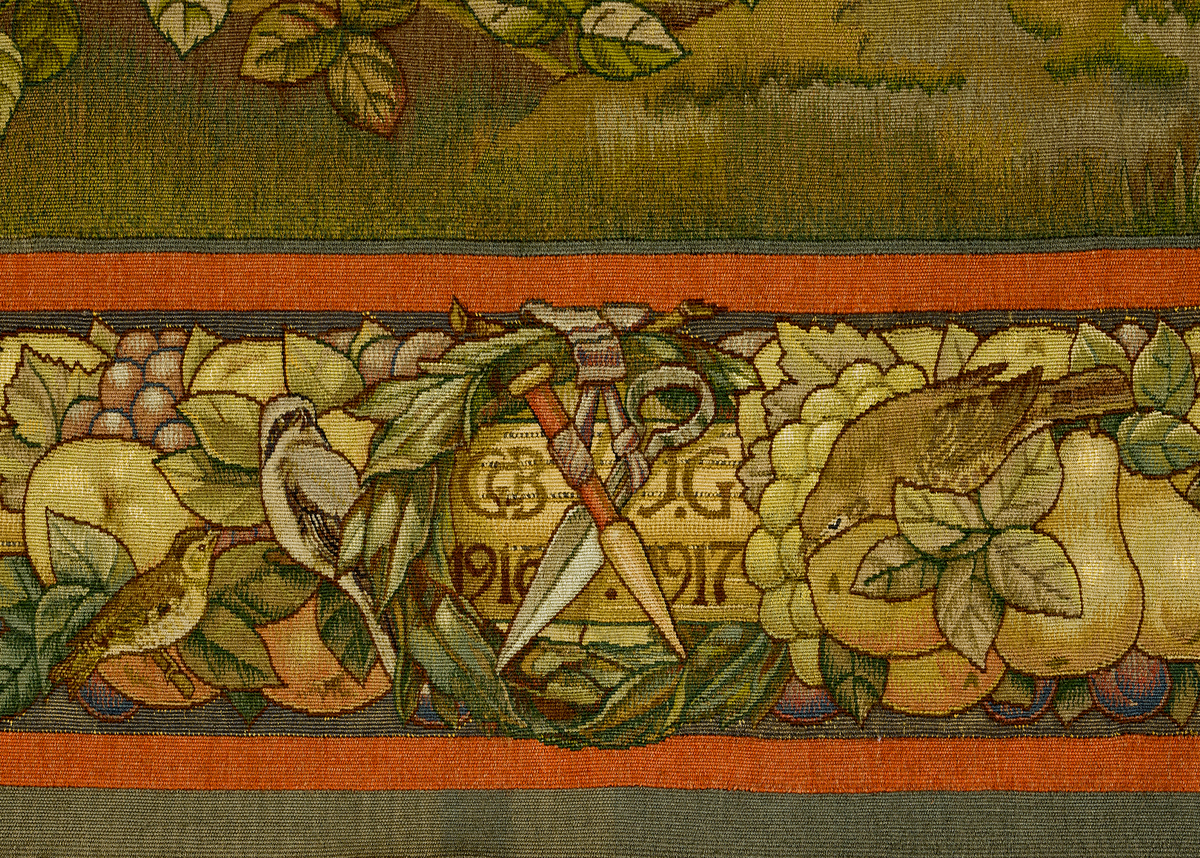 This exhibition tells the story of the Dovecot apprenticeship, featuring objects from the organisation’s archive, as well as historic and current works.
The loss of Dovecot’s founding master weavers, John ‘Jack’ Glassbrook and Gordon Berry in 1917 during World War 1, might have seen the end of the Tapestry Studio before it had fully begun, but the young apprentices Ronald Cruickshank, Richard Gordon and David Lindsay Anderson returned to continue weaving at the Studio. A new group of apprentices was recruited after 1919 and the cycle of activity at the Studio continued. This exhibition commemorates the 100th anniversary of the deaths of Glassbrook and Berry in 1917, and celebrates the legacy of their apprentices’ work.

Dovecot’s master weavers continue to teach new apprentices and the roots of their skills and knowledge can be traced back to those original founding weavers. The methods for teaching remain remarkably similar – beginning with simple triangular and curved forms in tapestry weaving. From apprentice pieces created by Dovecot’s first weavers, and the works of many apprentices in between, the exhibition brings this story to the present day, featuring sample works by current apprentice Ben Hymers.
The exhibition includes the loan of The Chace from Hampshire Cultural Trust – an important tapestry produced by Morris & Co. and woven by Dovecot’s founding weavers after their own apprenticeships with William Morris. Apprentice weaver Ben Hymers’ apprentice piece Hipsters Love Triangles, and his study work, Penelope, is also on view, along with his reactions to the six generations of apprentices who have gone before him.

A supporting programme of events will run alongside this exhibition, with an emphasis on the stories behind the tapestries, the apprentices and Dovecot’s heritage. All events have a hearing loop available for use and are free to attend unless stated otherwise.

*Hearing Loop not available for these demonstrations

The Dovecot Tapestry Studio Viewing Balcony can be visited on Thurs and Fri 12-3pm and Sat 10.30am-5.30pm.