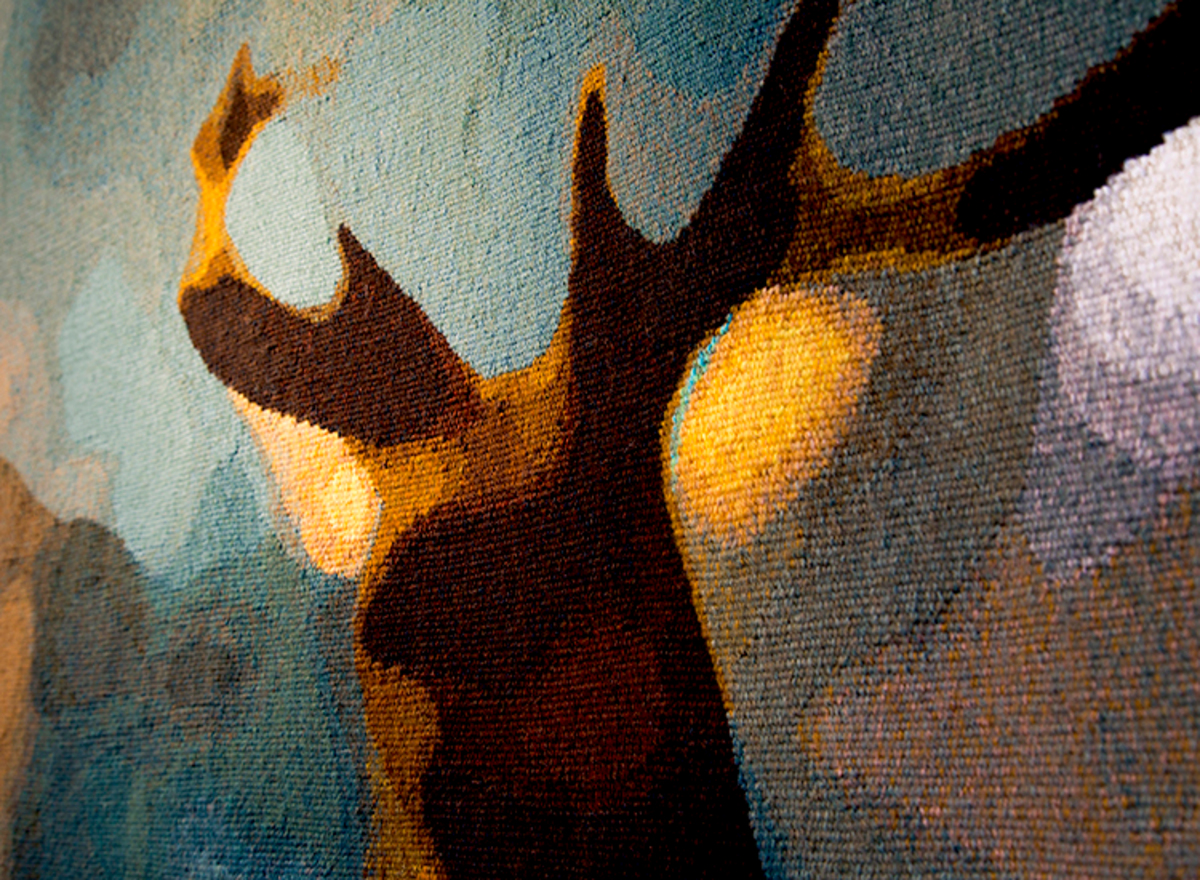 For the first time, Dovecot Tapestry Studio is inviting its supporters to the cutting off ceremony of the new tapestry with Peter Saville titled After, After, After Monarch of the Glen.

In the year that Landseer’s Monarch of the Glen returns to Edinburgh for the Festival, Dovecot is celebrating this national icon with a new tapestry in collaboration with graphic designer and style guru Peter Saville. Peter Saville, who is best known for his vinyl sleeve designs for Factory Records and as the creator of Kanye West’s visual identity, has created a design that plays with the iconography of the Monarch and its position in Scottish pop culture.

The After, After, After Monarch of the Glen tapestry woven by Dovecot is a postmodern tribute to not only Landseer’s Victorian masterpiece but also the work of pop artist Sir Peter Blake, who painted his own version of the Monarch for Sir Paul McCartney in 1966. The tapestry has taken three weavers over 1,500 hours to create led by Dovecot master weaver Naomi Robertson. In the postmodern spirit this is the second version of the tapestry which is commissioned in an edition of five, and the date of 2017 is woven into the design acknowledging that this is the year in which the painting was saved for Scotland.

For the first time, the public are invited to attend a special ceremony in which the After, after, after Monarch of the Glen 2017 tapestry will be cut from the loom on Wednesday 17 January, with a talk from the Director of the Scottish National Portrait Gallery, Christopher Baker. Baker is also the author of a new book on Sir Edwin Landseer’s painting and the launch of this publication The Monarch of the Glen will be conducted at the tapestry ceremony.

All the tapestries in the After, After, After Monarch of the Glen edition are available for purchase from Dovecot Tapestry Studio. Please email info@dovecotstudios.com for details.

Tickets for the ceremony can be booked here.
The talk starts at 6.15pm on the Weaving Floor of Dovecot Tapestry Studio and lasts for approximately 45 minutes including a chance to ask questions, meet the weavers and to enjoy the tapestry Cutting Off Ceremony. The event concludes with refreshments and a book signing in the Dovecot Shop, plus a final chance to see the Daughters of Penelope exhibition.

The Tapestry Studio Viewing Balcony will be closed from 27-31 Jan 2020 for installation of new displays.