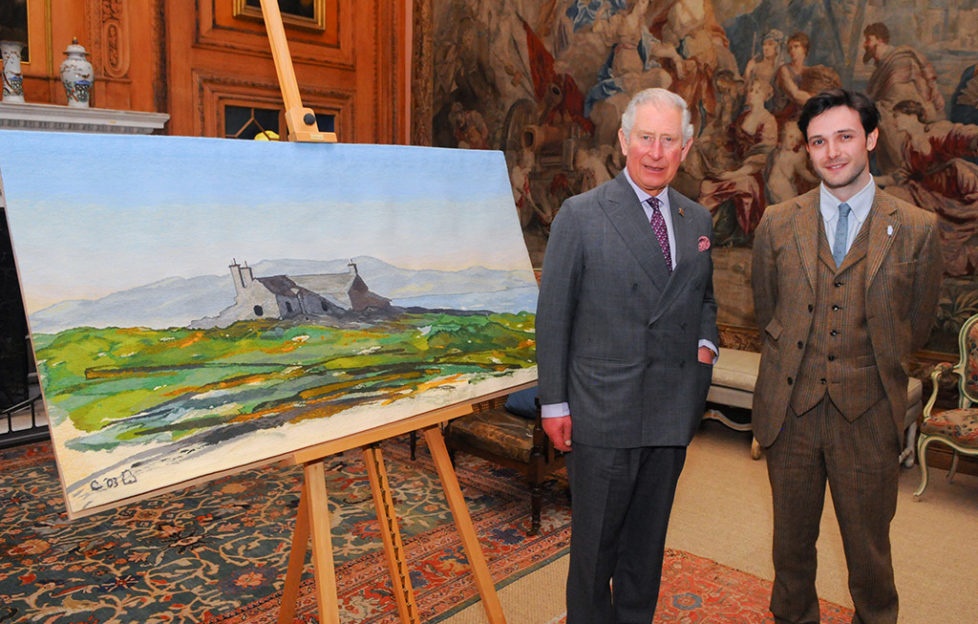 Edinburgh Reporter
HRH Prince Charles with Ben Hymers of Dovecot Studios and the tapestry he wove.

Tapestries have adorned the walls of Royal castles, manors and homes for centuries, perhaps earning tapestry its reputation as the 'noblest of the weaving arts.' With this pedigree, it's no surprise that over the years Dovecot Studios has received visits from several of the Royals. So, to commemorate the Queen’s Platinum Jubilee bank holiday weekend, we take a look back in the Dovecot archives to highlight the times when the work of our weavers has brought interest and praise from members of the Royal Family. 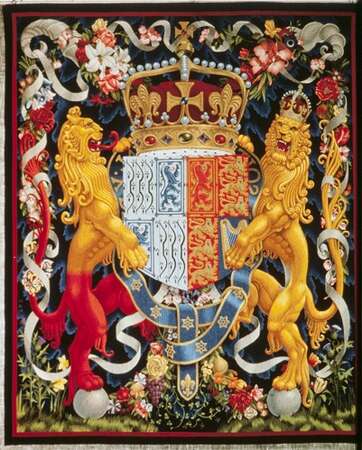 This extraordinary Coat of Arms was woven in 1950 for the then Queen (and subsequent Queen Mother) HM Elizabeth. It was designed by the artist Stephen Gooden, better known for his work as an engraver. This was the most magnificent and beautiful of a series of heraldic designs produced by Dovecot (then the Edinburgh Tapestry Company) when based in Costorphine.

Her Majesty HM Elizabeth visited the Studios in 1950 with Princess Margaret, the younger of her daughters, for the cutting off ceremony.

In those days, it was the tradition for a lady to cut off a tapestry using a pair of 'gold' scissors.

In 2004 the Queen visited Dovecot – then at its temporary home in the grounds of Donaldson’s College, Haymarket. She spoke with then Director, David Weir and weavers Naomi Robertson, Douglas Grierson and David Cochrane about the art of weaving and some of the tapestry projects they were then working on.  Her Majesty expressed her hope to staff that Dovecot would continue to thrive after overcoming challenges a few years previously.

In 2011 HRH Camilla, Duchess of Rothesay visited Dovecot Studios with her brother Mark Shand and saw an exhibition of weaving as well as meeting some of the animals from the exhibition Jungle City. The Jungle City exhibition was part of a project to protect endangered animals. One of the Jungle City sculptured animals can still be seen outside the viewing balcony at Dovecot today. The popular sculpture, named ‘Oranutangle’, was designed by weavers Jonathan Cleaver and Emily Fogarty and painted in Dovecot pink.

2018 - Abandoned Cottage on the Isle of Stroma, Caithness

The tapestry Abandoned Cottage on the Isle of Stroma, Caithness took Ben Hymers eight months to weave, and depicts a watercolour by His Royal Highness, The Prince Charles, Duke of Rothesay, painted in Scotland. HRH supported the project by generously giving permission for his watercolour to be translated by the apprentice.

The tapestry is set to take pride of place at The Castle of Mey, where Prince Charles is regularly in residence and which was restored by his grandmother, The Queen Mother. In 2019, Ben and other members of Dovecot Studios presented the tapestry to HRH at Dumfries House.

We will be open every Sunday in August

Late night on Thursday till 8pm