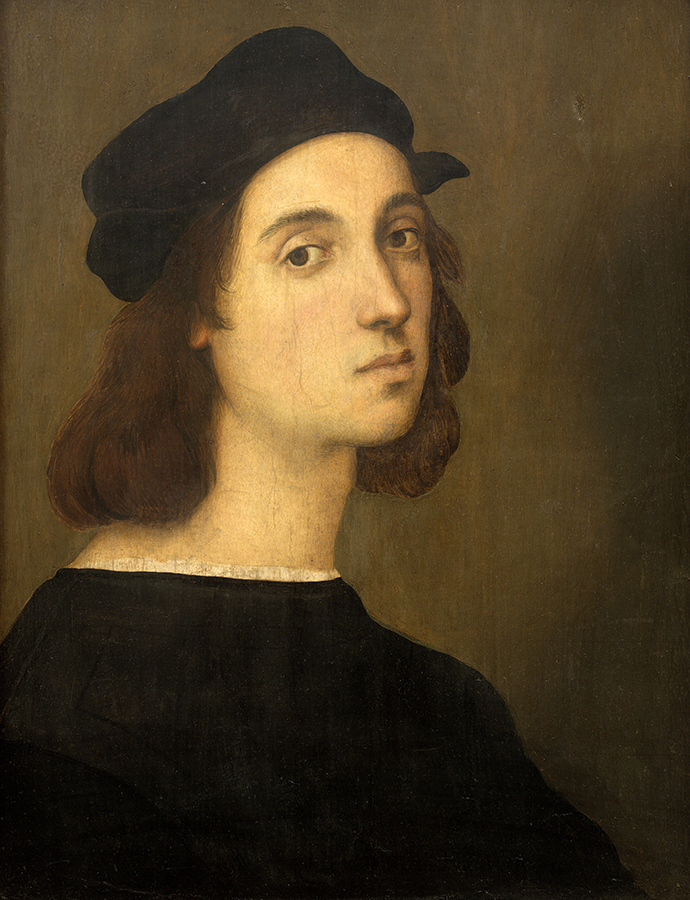 …it is safe to say that those who possess as many rare gifts as were seen in Raphael of Urbino are not simple mortals but (if it is permitted to speak in this way) mortal gods, and that those who by their endeavours leave behind in this world an honoured name in the annals of fame can also hope to enjoy a worthy reward in Heaven

The 6th April 2020 marked 500 years since the death of Raphael in Rome, aged just 37. Countries around the world have since paid tribute to the enduring legacy of the Renaissance master; his works of art remain as celebrated as they were in the sixteenth century. But who was Raphael and why is he still important today?

Raphael was born on Good Friday 1483 in Urbino, a small city in the Marche region of Italy, where his father, Giovanni Santi, was a painter and poet at the court of Duke Federico da Montefeltro and his son, Guidobaldo. The duke’s patronage had transformed the city into an inspiring hub of Renaissance culture, teeming with artists, humanists and writers from across Europe. Absorbing all that was around him, Raphael grew to appreciate the importance of painting as a noble and intellectual pursuit.

Raphael’s early works seem to be strongly influenced by the work of the eminent painters, Perugino and Pintoricchio. At the time, oil painting was a relatively new to Italy from the Netherlands and Raphael likely learnt how to work in this medium from Perugino. Given the startling similarities between the two artists’ works, it has been presumed that Raphael was active in Perugino’s workshop, but it is unlikely that any formal arrangement existed between them. The fact that Raphael was able to absorb, imitate, and improve on the works of his predecessors was central to his artistic success.

Raphael desired to learn from the powerhouses of the Renaissance that drew him to Florence. It was the period in which Leonardo da Vinci and Michelangelo were competing in an artistic showdown in the Palazzo Vecchio, where they had both been commissioned to produce frescos on opposite walls. The Florentine period was extremely influential in Raphael’s stylistic development. The delicate figures and sparse landscapes that characterised his earlier works were replaced by grander, more momentous and three-dimensional compositions, which transformed his traditional devotional images. In some respects, Raphael knew he would never be able to match Michelangelo or Leonardo. Yet, he managed to incorporate the dynamism of the former and the emotion of the latter into his work.

Before long, his reputation had spread to Rome and in 1508 Raphael was summoned to the papal court by Pope Julius II where he was to redecorate the papal apartments; it is here that we find the famous School of Athens fresco today. When it came to artistic projects in the Vatican, popes sought out the finest artists to outdo their predecessors and leave their mark on the palaces. Raphael joined the elite list of Vatican painters; it was undoubtedly his most prestigious commission yet. As such, his work became something of a fashion brand and was sought after by elite patrons in and outside of Rome.

Whilst Vasari’s description of Raphael as the “Prince of Painters” is by no means undeserved, it has perhaps obscured the diversity of his body of work. Today when we think of Raphael, it is often his paintings or drawings which first come to mind. In reality, he was an architect, antiquarian, and designer of prints, tombs,  metalwork, mosaics, stage sets, and, of course, tapestries. Aged 31 he was appointed to succeed Bramante as the chief architect of St Peter’s basilica. Also, it is thanks to Raphael that some of Rome’s ancient ruins still exist for us today. Along with his friend, the writer and humanist Baldassare Castiglione, he wrote a letter to Pope Leo X imploring him to cease new building works which were destroying the remains. For Raphael, who was awarded the position of “Prefect of all Antiquities on Earth” in 1515, Rome’s greatness lay in her august history and needed to be preserved to inspire future artists, as it had inspired him.

Raphael died prematurely and his death is shrouded in mystery. According to Vasari, it was his passionate affair with Margherita Luti that brought on the fever which killed him. Nonetheless, the funeral procession through the streets of Rome and his burial in the Pantheon was a fitting commemoration for the “Prince of Painters”. Raphael was not only an artist but he had the grace of the ideal Renaissance courtier, holding his own amongst intellectuals and bankers, princes and popes; he was even reported to be in running for a cardinal’s hat. Distinguished by his versatility and inventiveness, Raphael was a prolific businessman at the head of extraordinary collaborative enterprises. We cannot help but wonder what he would have achieved had he lived longer.