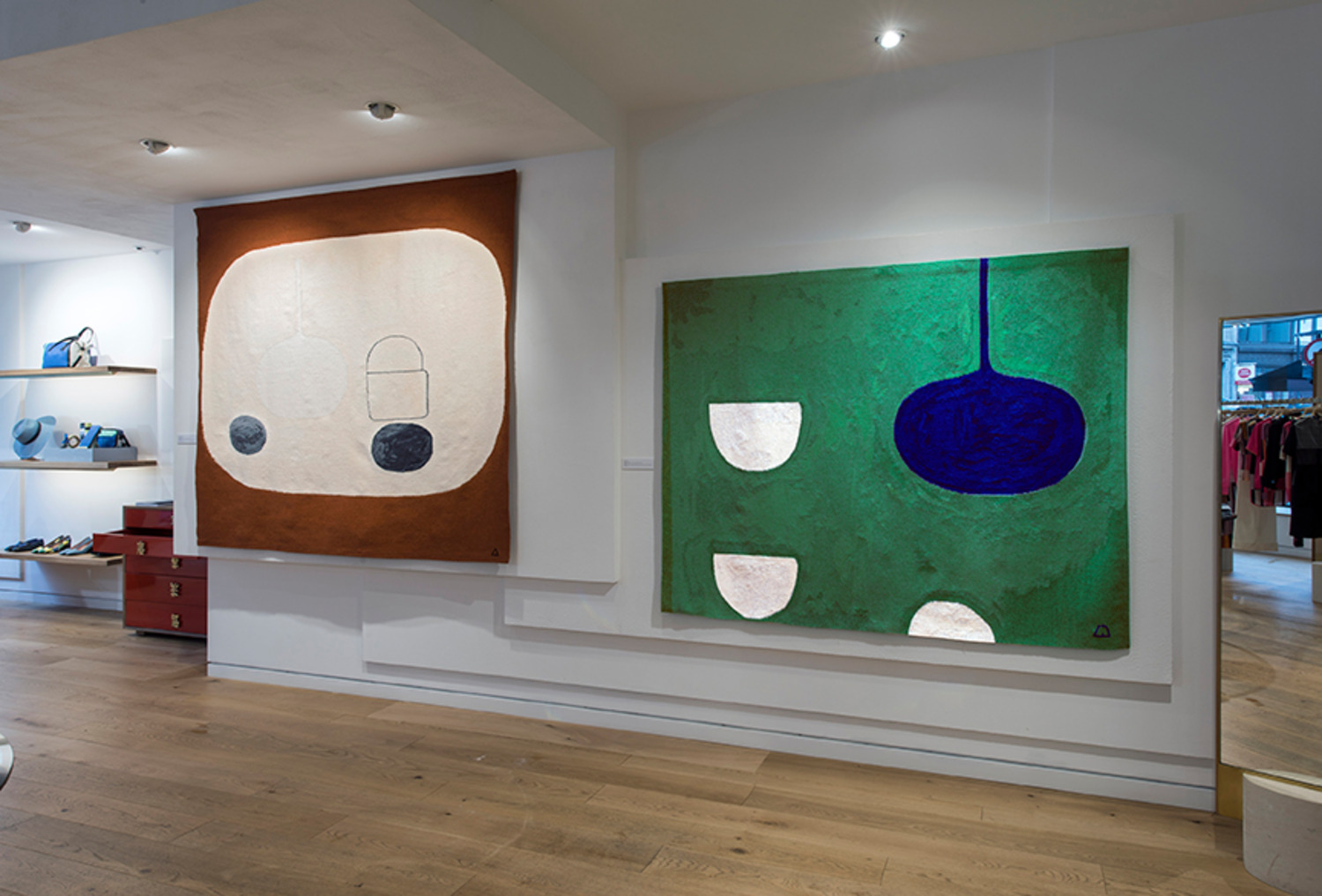 Dovecot Studios, showcasing a stunning series of William Scott tapestries made by Dovecot’s master weavers. The works are on show from the 17th of April until the 16th of July 2014 at Paul Smith No 9 Albemarle Street, Mayfair, London W1S 4BL. All the tapestries are available for purchase with a donation being made to the Alzheimer’s Society, the disease from which Scott suffered for some years.

William Scott was described by the New York Times in 1975 as “an artist of uncommon distinction, one of the best anywhere” and “one of the most accomplished artists of his generation”. Born in Greenock in 1913 he studied in Belfast and at the Royal College of Art in London. Scott lived in Paris before the war absorbing in particular the works of Braque, and in the 1950s spent much time in New York with Mark Rothko and Jackson Pollock. Awards included an Honorary Doctorate from The Royal College of Art, Appointed a Royal Academician and presented with the CBE.

In the 1970s William Scott was in correspondence with Dovecot Studios but the connection had long waned until 2007 when David Weir, as Director of Dovecot, approached his estate. Managed by Scott’s son, Robert Scott, the estate was delighted to collaborate with Dovecots then Head Weaver Douglas Grierson, to select 3 Scott images, which they felt would be translated most effectively by the weaving team at Dovecot. The resultant tapestries are those on show at Albemarle Street.

Throughout Scotts’ career, the themes of still-life, landscape and the female nude recur in his work. Although there are phases where his paintings could be called non-objective, more often they explore the space between abstraction and figuration.

William Scott was born in Greenock, Scotland, in 1913. In 1924, his family moved to his father’s home town of Enniskillen in Northern Ireland where Scott soon began art classes with a local teacher, Kathleen Bridle. In 1928 he enrolled at the Belfast School of Art, moving to London three years later to take up a place at the Royal Academy Schools, initially in the sculpture department, later moving to painting. He married fellow student Mary Lucas in May 1937 and soon after they travelled to Italy and France, establishing an art school in Pont-Aven with the painter Geoffrey Nelson.

In 1938, Scott exhibited at the Paris Salon d’Automne, and was elected Sociétaire that same year. Days before the outbreak of the World War II, the Scotts left France, moving firstly to Dublin and then to London before eventually settling in Somerset. Scott joined the Army in July 1942, serving firstly with the Royal Army Ordnance Corps and then as a lithographic draughtsman with the Royal Engineers. Although not demobilized until January 1946, he continued to paint and to exhibit during the War both in group and solo shows.

On leaving the Army, Scott took up the position of Senior Painting Master at the Bath Academy of Art, at Corsham Court, Wiltshire. During the decade in which he taught at Corsham, Scott made frequent trips to Cornwall and became good friends with many of the St Ives Group of artists. He also continued to dedicate much of his time to his own painting, which, at that date, was concerned mainly with the theme of still-life. A number of these works were shown at two one-man exhibitions at the Leicester Galleries in London, the first in 1948 and the second in 1951. 1951 was also the year of the Festival of Britain: Scott was one of the sixty artists invited by the Arts Council to exhibit as part of the celebrations. Around this time, Scott’s work moved closer to non-figuration and his first one-man show at the Hanover Gallery in London, which opened in June 1953, included a number of, loosely, abstract paintings. That same year, an extended visit to North America resulted in friendships with New York based artists including Rothko and de Kooning. One of the first British artists to be aware of Abstract Expressionism, the work he saw in America made Scott aware of how much his painting was, and would continue to be, tied to a European artistic tradition.

By 1956, Scott’s success as an artist, both nationally and internationally, allowed him to give up full-time teaching, although he would remain interested in, and involved with, art school education for the rest of his life. In 1958 he represented Great Britain at the Venice Biennale, one of many occasions on which his work was chosen by the British Council to be exhibited abroad. At the 1961 São Paulo Bienal, Scott won the Sanbra (International Critics) Purchase Prize. The 1960s saw retrospective exhibitions in Zurich, Hannover, Berne and Belfast. There were also major shows in London, Tokyo, Paris, Brussels, Copenhagen, Oslo and Rotterdam. In 1963 Scott was invited to take up the offer a 12-month residency in Berlin by the Ford Foundation. In 1972, the Tate Gallery mounted a major retrospective which included more than 125 paintings dating from 1938 onwards. The following year Scott toured India, Australia and Mexico as a British Council lecturer. He received honorary doctorates from the Royal College of Art in London, Queen’s University Belfast and Trinity College Dublin.

In 1984 Scott was elected a Royal Academician, shortly after the onset of Alzheimer’s disease. The 1985 film, Every Picture Tells A Story – about the artist’s early life – was made by his son, James Scott, for Channel 4 Television. A 1986 exhibition at the Ulster Museum in Belfast toured to both Dublin and Edinburgh.

On the 28th December 1989 Scott died at his home in Somerset. Posthumous shows have ranged from a 1998 survey at the Irish Museum of Modern Art to a 2004 show at the Denise Bibro Gallery in New York.

The William Scott Foundation was established by Robert & James Scott in 2007. The Foundation funds several long term projects, including the cataloguing & storing of all related archival material as well as the research & publication of the Catalogue Raisonné of works in oil.

Another important purpose of the Foundation is to raise money, support & awareness for the Alzheimer’s Society & its research into possible treatments, if not a cure for this disease from which Scott died.

The Dovecot Café is currently closed while we recruit a new café operator.