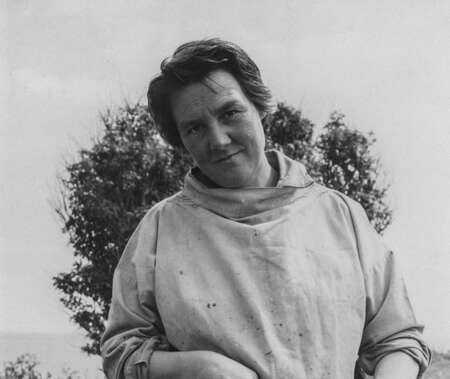 Born in 1921 in Sussex, Joan Eardley’s family moved to Scotland in 1939 and a year later she joined the Glasgow School of Art. She found subjects in the shipyards of Clydebank and the slums of Townhead, at first the run-down tenements and buildings and later the children and streetlife around Rottenrow where the character of the people and the place became the vital subject of her work. Her art education was finished with scholarship visits to Paris and the cities of Renaissance Italy and back in Scotland she ventured with her art school friends to Arran and back to the south of France. By the fifties, Joan Eardley divided her life between her studio in Townhead and the fishing village of Catterline, a place she had discovered in the North East of Scotland. Eardley felt at ease in these two contrasting localities and over the succeeding decade, as if by accident, she created an epic vision of the world from no more than two streets and one small fishing hamlet. The slums of Townhead are no more, the harsh realities memorialised by the honesty of her vision, the spirit of the people invested in its children captured, enduring like no other example in the history of art. Catterline remains unchanged and the village is inevitably a place of pilgrimage for the thousands who admire the artist’s deep-felt engagement with nature on the Kincardineshire coast. The Scottish Gallery held its first Joan Eardley exhibition in 1961 and later her memorial in 1964. In 2021, Dovecot collaborated with The Scottish Gallery and the Artist’s Estate to celebrate Joan Eardley’s centenary with the first tapestry of her work based on the 1959 painting July Fields.

Dovecot Studios will be open as usual from 12-17 September.