Weaving a Legacy with Archie Brennan: a new tapestry for Scotland 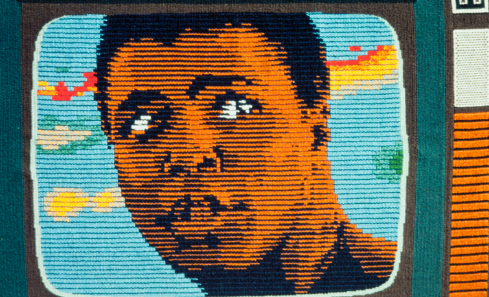 Earlier this year, Dovecot Studios was awarded National Lottery Funding through Creative Scotland to research and experiment with the tapestry innovations developed by the world-renowned Scottish weaver Archie Brennan. The project is currently in progress and will lead to the design and creation of a major new tapestry to promote Scottish tapestry skills worldwide.

Archie Brennan (b.1931, Edinburgh) is recognised internationally as an ‘undisputed master of modern tapestry’. He’s also known as an innovator, pioneer and iconoclast, friend to Eduardo Paolozzi and Sean Connery, and a great Scottish Pop artist. Brennan trained as a Master Weaver at Dovecot Studios from 1947, learning his skills in Scotland while creating distinctively Scottish tapestries.

Initially Brennan studied drawing at Edinburgh College of Art evening classes at age 15, where he met apprentices from Dovecot (Edinburgh Tapestry Co.) who were also attending as part of their apprenticeship. In 1948 he joined Dovecot on an apprenticeship that lasted until 1954. After studying in France for a time, Brennan returned to Edinburgh, and gained degrees from Edinburgh College Art from 1958-62. He left Scotland at the end of the 1970s and moved to various places around the world. These included Australia, Papua New Guinea, where he taught at the Art School and designed the mural for the front of their parliament building, and North America, where Brennan settled in the 1980s.

Yet Brennan’s legacy to Scotland and to Scottish tapestry weaving is at risk with a new generation of tapestry weavers who have never had the opportunity to work with him, to study with him or to weave his designs. To protect Scotland’s intangible cultural heritage in fine art tapestry, this major skills development project will not only reclaim Brennan as a Scottish success story but also ensure that his innovative approaches to design and technique are passed to a new generation of Scottish weavers. During the project, the Dovecot weaving team are spending time interrogating the tapestry techniques used by Brennan and using them to experiment in designing a new 21st century tapestry. Learning from Brennan’s own reworking of textile imagery in his designs, the weavers have taken inspiration from the textile collections of National Museums Scotland.

The new tapestry will be designed and woven throughout 2019-20. It will be on public display with interpretation during its creation from Spring 2020 onwards and the weavers will share their skills in a series of public talks, workshops and videos that highlight the tacit weaving knowledge in Brennan’s tapestries.

Dovecot Gallery and Shop are closed from 18 March 2020. Please see our website and social media for updates.

Dovecot Cafe by The Pantry is closed from 18 March 2020. Please see our website and social media for updates.