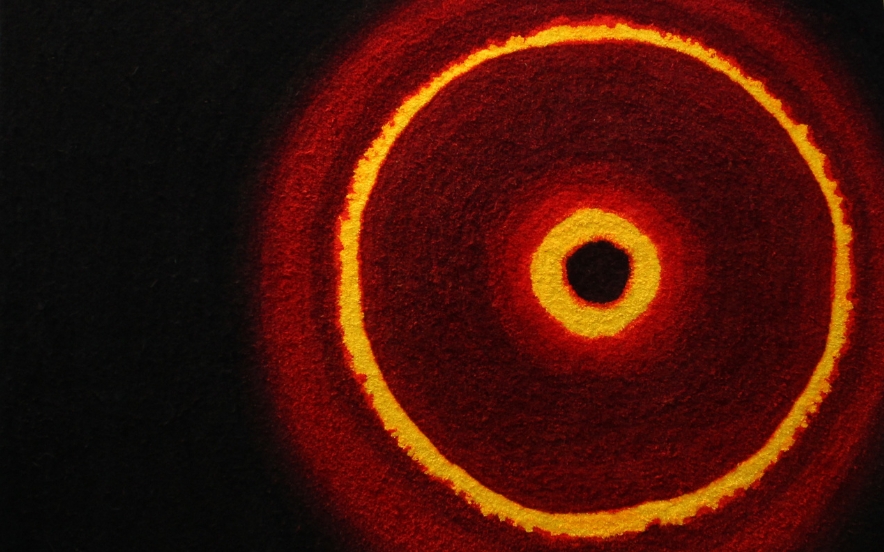 Gathered Gold Light, a continuing project between Fabian Miller and Dovecot presents a new challenge to contrast the burning centre of light with the surrounding darkness and the circle of illumination between them. The latest, the second in an edition of three, tufted by Master Weaver Louise Trotter and Weaver Elaine Wilson, has now been completed.

Since 2014, Dovecot has developed an extraordinary body of work in collaboration with fine art photographer Garry Fabian Miller. These artworks explore light, colour, texture and the depth of field between images in photography and three-dimensional textile.

Collaborative highlights with the artist include a tapestry Voyage into the deepest, darkest blue (2018) woven by former Dovecot Weaver David Cochrane, Master Weavers Naomi Robertson and Emma Jo Webster and Weaver Rudi Richardson. At 250x300cm, Voyage into the deepest, darkest blue is not a direct representation of one of Fabian Miller’s works, instead, it is a new image created by amalgamating two of the artist’s photographs. The tapestry formed the centrepiece of an explorative exhibition in 2018 titled Voyage.

Dovecot Tapestry Studios also worked with Fabian Miller to create a series of gun-tufted Hearth Rugs, the first two of which featured in a Dovecot Studios exhibition Dwelling in 2015. Three designs by the artist were translated into Hearth Rugs ‘The Golden Light', 'Day’s Eye' tufted by former weaver Kristi Vana and 'The Ruby Embers’.

The first Hearth Rug 'The Golden Light’ was tufted by Master Weaver Louise Trotter and Weaver Ben Hymers. The challenge for the tufters in interpreting Garry Fabian Miller’s photographic work here was in translating the emanating light qualities of a Cibachrome print into wool. The key to achieving this successfully was to look at the image’s effect and to understand the artist’s intentions, rather than aiming merely to create a copy of the original image. In this way, The Golden Light rug interprets one artist’s work by another and results in an entirely new work altogether, rather than a reproduction.

For more information email at info@dovecotstudios.com or call 01315503660.